One of the most common telephone schemes in the last few years involves criminals posing as the IRS trying to extract payment from unsuspecting victims. Typically, they threaten to have their targets arrested if they don’t make payment for alleged back taxes. Are these scams simply targeting people at random? It appears to be the case as in late March, an Eau Claire, Wisconsin police officer who educates senior citizens about telephone scams was the target of a criminal enterprise that, over the phone, threatened to have him arrested if he did not pay a delinquent tax debt.

The officer decided to record the call despite not pressing charges or initiating any further investigative action. 3.4 million people viewed the officer’s video in the first two days. After being threatened with arrest if he didn’t make immediate payment, Officer Kyle Roder and fellow cop Don Henning called the perpetrator back.

At one point, the caller threatens to have the police issue a warrant and visit Officer Roder’s residence, but later makes the mistake of asking him for his name and address so he can review a (nonexistent) case file. Roder asks “if you don’t have my address, how are you going to do that?” The caller identified himself fist as Officer James Maxwell, then James Johnson, and finally as James Maxwell Johnson. You can call me Jay or you can call me Ray.

Roder stated that the call was recorded for educational purposes and that the police department would not further investigate and attempt to press criminal charges against the caller. ‘When you follow [calls like these] up, realistically they take us out of the country and out of our jurisdiction,’ he said. ‘But if someone is out of money we will work with numerous agencies – including the FBI and the real IRS – to investigate.’

According to a CBS News report, more than three million fake IRS and other phone scams were tracked in 2016 by the Federal Trade Commission’s Consumer Sentinel project. Thus, this type of scam is now America’s most common having overtaken identity theft. 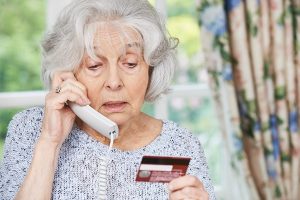