Here is part one of a blog listing ten interesting facts about Social Security. I’ll cover the first five in this blog. Stay tuned for part two!

Recent reports show that 60 million people, which accounts to more than one in every six Americans, collected Social Security benefits in June of 2016. Four in five beneficiaries were older individuals while the remaining 20% received Disability Insurance (DI) or were survivors of deceased workers.

Workers earn retirement benefits and DI coverage through their Social Security payroll tax contributions. Approximately 96 percent of people aged 20-49 who worked in covered employment in 2015 have earned protection through Social Security. For a family of four with average earnings, this is equivalent to a “life insurance policy” with a face value of over $600,000. Also, in cases of severe disability, 90 percent of people aged 21-64 are insured.

Social Security benefits are calculated by the amount of earnings on which Social Security payroll taxes are paid. Thus, the higher the earnings, the higher the amount of benefits. Social Security benefits represent a higher proportion of a worker’s previous earnings for workers at lower earnings levels. Benefits for low wage-earners retiring at age 65 typically replace approximately half of their prior earnings. In contrast, benefits for high wage-earners generally replace about one-third of prior earnings, though they are larger in dollar terms than those for the low-wage worker.

Because Social Security isn’t means-tested, it encourages personal saving and private investment. Why? Because it doesn’t reduce or deny benefits if income or assets exceed a certain threshold.  If Social Security were based on a some form of means-test, the result would be a substantial increase in reporting and processing, thus reducing many of Social’s Security’s advantages, without providing any significant financial benefit to the system.

What are these advantages? Social Security has lower administrative costs (a mere 0.7 percent of annual benefits, far below the percentages for private retirement annuities) and a higher annual payout than typical private retirement annuities (per dollar contributed). This is a result of its risk pool not being limited to those with a long life expectancy, and its funds not subject to lump-sum payments or bequests. NOTE- THIS IS NOT TRUE FOR SSI BENEFITS

In June of this year, the average Social Security retirement benefit was approximately $1,350 monthly, or slightly over $16,000 annually. A typical disabled worker and aged widow received somewhat less than these amounts. Social Security benefits replace about 39 percent of past earnings for a worker with average earnings who retires at age 65. When the retirement age rises to 67 over the 2017-2022 period, this rate will fall to about 36 percent for a medium wage-earner retiring at 65. As it is, the U. S. ranks near the bottom of developed countries in the percentage of an average worker’s earnings replaced by public pensions such as Social Security.

Do you have a potential disability claim? One of the best ways to improve your chances of meeting all of the requirements for the allowance of a claim (and avoiding the denial of benefits) is by retaining the services of a qualified Kentucky Social Security Disability attorney. Contact Sullivan Law Office today. We offer free consultations, so you have absolutely nothing to lose! We look forward to hearing from you. Call 888-587-0228 or visit us online. 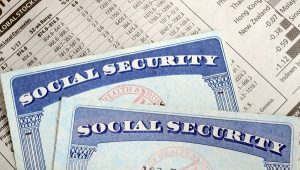