At Ohio Northern University, located in Ada, Ohio, an hour south of Toledo, two law professors had difficulty having what seemed like a simple conversation in 2012. One professor, Scott Gerber, grabbed a fellow faculty member, Stephen Veltri, by the shoulder to discuss an issue regarding the law school’s librarian.

The result? A year after the attempted conversation, Gerber sued Veltri for damages primarily based on assault and battery. He alleged that as a result of the contact, Veltri had received injuries to his shoulder and experienced mental anguish. A battery is defined as the act of a person causing a harmful or offensive contact, which would offend the ordinary person.

At the five-day trial before U.S. District Judge Jack Zouhary, Gerber claimed that Veltri grabbed him in a “strong and tight fashion,” to which he responded, “Take your hands off me!” Veltri testified that his colleague seemed “strangely offended.” A psychiatrist testified that Gerber had been diagnosed with “long-standing” symptoms of adjustment disorder, anxiety, and depression.

Judge Zouhary said the case was “seemingly ripped from the pages of a first-year torts exam, with the added twist that the parties are, in real life, law school professors.” He ruled that Veltri did not know that grabbing Gerber’s shoulder would cause harm and that an ordinary person would not have been offended. He dismissed the case. 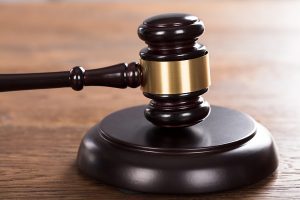