Skip to content
You are here:Home-Legal News, Social Security Help Louisville-Florida Man Walks After Killing Neighbor And Delivering Body To His Lawyer

Bokeelia, Florida resident John Marshall, delivered the corpse of his neighbor, whom he had just shot and killed, in the back of his pickup truck to the Harris Law Firm, located in Fort Meyers, Florida. In what may seem surprising, Marshall was not indicted for the crime, as a grand jury found no evidence that he committed a crime.

Marshall stated that after his neighbor, Theodore Hubbell, threatened him with a gun, he shot him in self-defense after wrestling the gun away from him. Robert Harris, Marshall’s lawyer stated that when Marshall arrived at his office, he was disheveled, had a broken tooth and two badly-injured possibly broken thumbs, further remarking that “It’s the cleanest-cut case of self-defense I’ve ever seen.”

A Florida grand jury agreed declaring “There are no eyewitnesses to the shooting and the evidence available to this grand jury is insufficient to rebut John Marshall’s claim of justifiable self-defense.”

Prior to the shooting, Marshall had been represented by the Harris Law Firm for an aggravated battery case. Marshall called the law office a few days before the incident claiming he felt unsafe after Hubbell had threatened him. Attorneys at the Harris Firm advised Marshall to obtain a restraining order against Hubbell. A sad case, nonetheless. 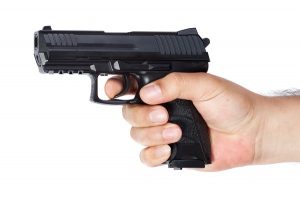