Skip to content
You are here:Home-Blog, Disability Attorney, The Supreme Court-Eye On The SCOTUS: Utah v. Strieff

One of the challenges of being an attorney is keeping current on changes in the law. At the Sullivan Law Office, we take great pride in the legal research skills of our attorneys. Whether it is staying focused upon the changes and trends in federal or state law, the attorneys at the Sullivan Law Office stay informed, including the cases heard by the Supreme Court of the Unites States (“SCOTUS”). In this blog we’ll look at one of the more recent SCOTUS cases, which of course as it usually does, carries wide implications for many Americans, in this case, American politicians.

The Strieff case involved police conducting surveillance of a house after receiving an anonymous tip that drug dealing was taking place inside. Edward Strieff entered the house and then quickly left. Police stopped him, determined he had an outstanding warrant for a traffic violation, and arrested him. He was searched incident to his arrest and found to be in possession of illegal drugs. The Supreme Court of Utah ultimately held that the stop was illegal and a violation of his Fourth Amendment rights because of a lack of reasonable suspicion.

The issue before the SCOTUS was whether the evidence had to be excluded from trial because it was the direct result of the police illegally stopping Strieff. Typically, the Supreme Court has held that evidence that is the product of illegal police activity is subject to the exclusionary rule and may not be used at trial because it is “fruit of the poisonous tree.”

The Supreme Court in a 5-3 vote reversed the Utah Supreme Court’s decision holding that the evidence against Strieff was admissible. The Court’s rationale was that the attenuation exception to the exclusionary ruled applied. This doctrine provides that evidence is admissible when the connection between unconstitutional police conduct and the evidence is remote or has been interrupted by some intervening circumstance, so that “the interest protected by the constitutional guarantee that has been violated would not be served by suppression of the evidence obtained.”

The court said that the discovery of Strieff’s outstanding arrest warrant was a critical intervening circumstance that was wholly independent of the illegal stop. The warrant’s discovery broke the causal chain between the unconstitutional stop and the subsequent search. This circumstance and the fact that there was no evidence that the police’s conduct in making the illegal stop was flagrantly unlawful, together outweighed the fact that the unconstitutional conduct and discovery of evidence both occurred closely in time.

The dissent noted that this decision gives police officers an incentive to stop people in violation of the Fourth Amendment, knowing that if there is an outstanding warrant, they may conduct a search and any evidence will still be admissible despite the legality of the arrest. 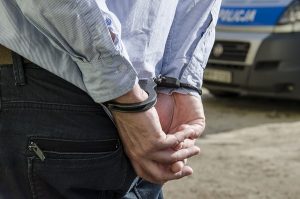